It might seem an unlikely match to ask filmmaker Ivo Belohoubek to share his experience having afternoon tea at Cinnamon Bazaar, Covent Garden. However the request was met as a welcomed opportunity to slow down for the afternoon…

I am a Londoner which means I am either in a rush or late. I occasionally slow down to text someone that I am late or to wait for someone who is later than me. Time is never on my side. Afternoons often remind me why I should have taken that course in time management. I can get to places in the morning (transport permitting) but by mid-afternoon my overambitious schedule of work, meetings, gym, lunch and cheeky client calls starts to crumble and I am often faced with the humiliating run to the school gate or desperately trying to find a quiet spot on top of an escalator to take a Skype call with a client million miles away pretending I am sitting in office… “sure, no problem but no, I can’t video call, my camera is off …” 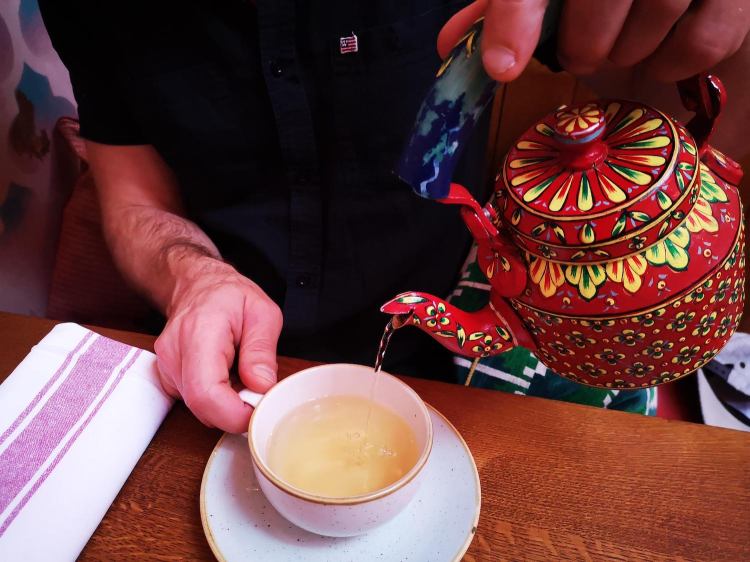 So the idea of slowing down for an afternoon tea has long been conscripted to the realms of fantasy. My Soho Times has challenged me to try though, and I found myself sitting opposite The Soho Girl – both of us knackered from a day of running around – at 3.30 pm on a Wednesday with a simple yet exotic menu at the Cinnamon Bazaar in London’s Covent Garden. Make no mistake, the Cinnamon Bazaar afternoon tea is not cream tea with an English biscuit but a wholly different flavour affair…

Cinnamon Bazaar is inspired by the bazaar culture of India, Iran, Pakistan and the Middle East. Its menu is a mixture of culinary influences just like bazaars are the places that bring together cultures through trade. The afternoon tea is a cultural institution – In a Bazaar you sit down to negotiate business – transplanted onto London’s manic lifestyle. Luckily, you are not encouraged to haggle over the price of the menu.

Even the décor inside reminds one of a bazaar with sheets of red fabric hanging from high ceilings and simple yet eclectic table setting. I felt like I have been teleported to a place far far away. So relax, slow down and enjoy the afternoon tea: a three course snack meal with sweet, savoury and spicy elements. For drinks Kai and I went for Indian Masala Chai and White Peony tea which came in brightly coloured tea pots. 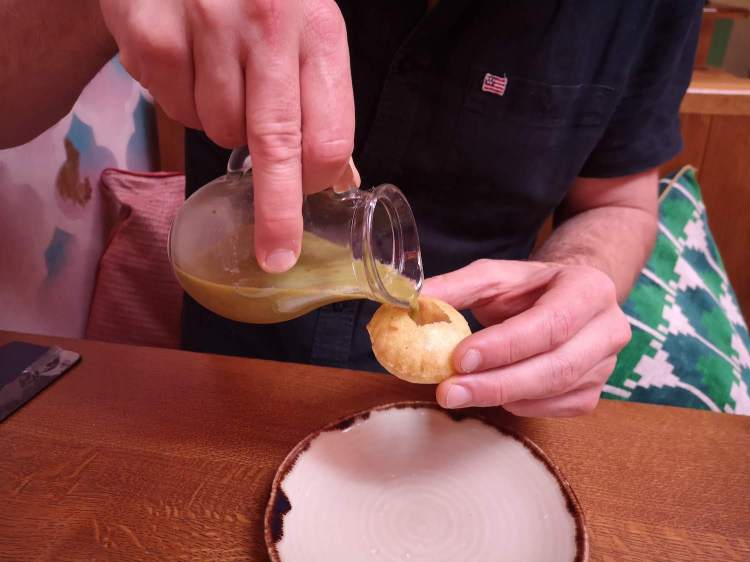 But the tea was pretty much the only thing I could understand from the menu. The rest was a journey into the unknown which started with Chaat. It came on two plates – one slightly resembling an Indian version of nachos (here I sincerely apologise to both nachos and chaat enthusiasts for misrepresenting their dishes) and the other was a plate of savoury shells and a cup filled with a spicy, sweet and sour drink which you simply pour in a shell and.. smack … in your mouth. Delicious! I recommend you stretch your jaws as the shells are rather big. It’s surprising and writing about it doesn’t do it justice.

The rest of the meal comes in a three tier stand and we opted for vegetarian, fish and chicken option with a dessert on top. There is very little point in me trying to describe the tastes because they are so different to what you may be used to. Let me just say it is very different… I personally think there was an element to an “acquired taste” syndrome in one of the sauces but who am I to say whether you would like it or not. The experience was totally worth it with the ambience, the environment and the occasion. 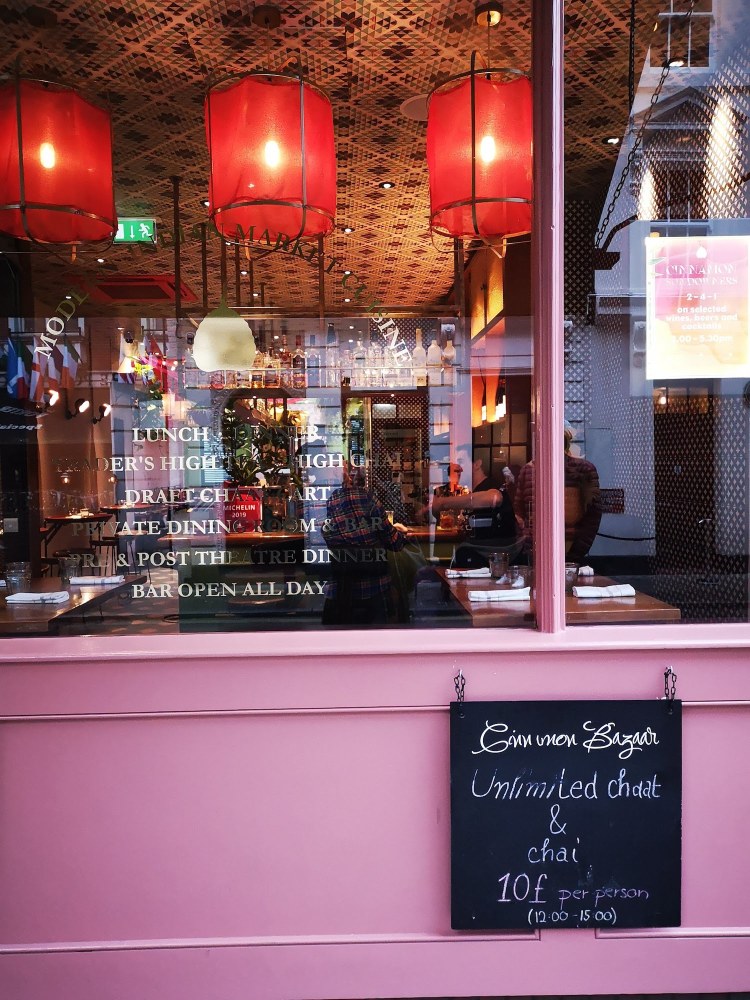 For some reason the experience, the environment and the atmosphere has indeed forced us to slow down, put the phones away (that is a big fat lie, how else would we take the photos) or at least stay away from social media for a while and be present in the moment, focus on the flavours, the simple gesture of pouring tea into a cup and having a good ol’ conversation. Overall I’m still not sure it’s wholly my acquired taste, however that’s the beauty of being in London – you have the opportunity to try everything… And an Indian inspired Afternoon Tea? Why not?!