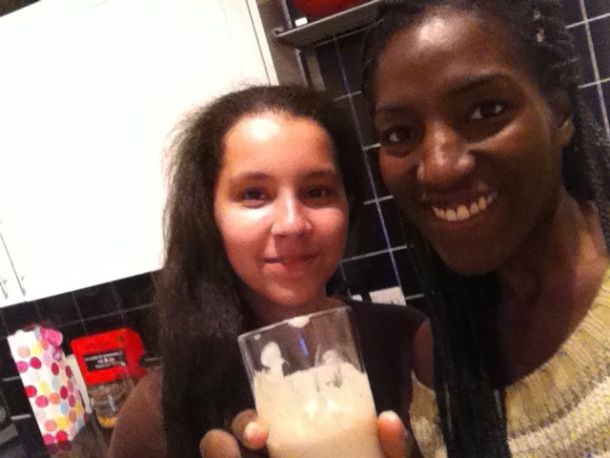 Costa Rica’s contribution the 2014 World Cup has been nothing short of entertaining putting them at the Top of Group D with 7 points (and England leave the tournament with just 1 point).

With the victory of Costa Rica’s wins, they are no doubt the pride of Central America and I’m reminded of when my Couchsurfer Edith from neighbouring Panama came to stay last October offering to make a Central American favourite – arroz con piña.

The indulgent drink which I can only describe as “rice pudding meets milkshake” is a traditional Panamanian drink. The Pineapple peek gives the drink a woody flavour like nothing I’ve tasted before as the flesh of the pineapple isn’t used. Before Edith left she wrote down the recipe for me – just how her grandmother makes it! I dug out the recipe and which came with a cute note of thanks from my CS guest.

A taste of Central America from the comfort of your home:

Wash and peels the pineapple. Put the peel in a saucepan and cover with water until it’s covered about half an inch above the peel.

Bring to boil for 20minutes then take the peel out leaving the water in the pan.

Add the cup if rice and cool until rice is thick and “over cooked”.

Put the rice in a blender with its water. Add more water depending on consistency to your taste.

Blend the rice until smooth but still with bits. Add the evaporated milk. Blend again until with less bits.

Add sugar according to your taste.

Special thanks to Edith for sharing this recipe with me. Gracias!

I'm Kai a sharer of stories, experiences and self-development from my travels! This blog is my safe space to share ideas, highlight under-represented voices... And continuously create myself through travel. Thanks for joining my journey x TravelmakerKai View more posts